On behalf of my delegation, I would like to thank the panellists for their thought-provoking presentations today. Indeed our discussion is pertinent not only from the point of view of protecting our children from the scourge of sexual violence but also from that of securing our future as a whole.

My delegation aligns itself to the statement made by Pakistan on behalf of the OIC.

As in many other developing countries, cases of sexual violence against children in Indonesia are closely linked to poverty.  Poverty severely limits development and renders children vulnerable to terrible forms of abuse and harm.  Poverty also deprives children of any choices about their future and is often a root cause of illegal trafficking and involuntary migration.

With the aim of seeking a better life,  children are sadly often forced to uproot their lives and migrate to unfamiliar environments and countries.  Indeed, migration, both internal and trans-national, contributes to child prostitution, trafficking in persons, sex tourism, and domestic sexual violence.

At this point, my delegation would like to seek further elaboration from the panellists about some of the best practices used by other developing countries in tackling sexual violence against children in the context of migration? And how these practices relate to their poverty eradication measures? 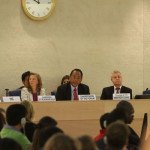 POINTS OF PRESENTATION “CTI FORUM AND OUTCOME: DEFINING FEATURES OF CTI AFTER THE FORUM”

DELIVERED BY AMBASSADOR EDI YUSUP DEPUTY PERMANENT REPRESENTATIVE OF THE REPUBLIC OF INDONESIA TO THE UNITED NATIONS AND OTHER INTERNATIONAL ORGANIZATION IN GENEVA MEETING OF CTI GROUP OF FRIENDS GENEVA, 9 SEPTEMBER 2014   The first Forum of the Convention against Torture Initiative (CTI) was held on the outskirts of Geneva on Wednesday, 3 September… Continue reading

Check against Delivery  Statement by the Indonesian Delegation at the 21st Session of the Human Rights Council Agenda Item 3 Interactive Dialogue with Special Representative of the Secretary General for Children and Armed Conflict Geneva, 11 September 2012   Madame President, My delegation thanks Ms. Coomaraswamy, the outgoing Special Rapporteur, for her report, highlighting current… Continue reading