Statement at the 13th Session of the HRC, Item 3 : Report of the Special Representative of the Secretary General on violence against children; report of the Working Group on the Optional Protocol of the Convention on the Rights of the Child

My delegation would like to thank the Special Representative on violence against children for her first report to the Council. We appreciate and support the work she has undertaken to highlight certain aspects of the rights of the child which until now have been insufficiently addressed.

Following the adoption of the Law on Child Protection in 2002, a number of policies and programs have been initiated in Indonesia. The law also mandated local governments at provincial, regency and city levels to establish a task forces. These task forces comprised government agencies and civil society including business sectors, who implemented policies and programs on child protection.

These initiatives have involved, among others, the consultation of children in more than 20 provinces in an effort to raise awareness and make children more active partners in the consultation process nationwide.

The National Commission on Human Rights and the Commission on Indonesian Child Protection have established a joint independent complaints and monitoring mechanism in close cooperation with relevant UN agencies in the country.

Other important initiatives include the Telepon Sahabat Anak 129 (TESA 129) a child helpline service, and an Integrated Service Centres for the Protection of Women and Children throughout the country.

My delegation shares the view outlined in the report that in order to tackle violence against children, there is an urgent requirement for effective data collection mechanisms.

As part of the National Development Plan for 2009-2014, the government has already budgeted for the upgrade of the database to strengthen its capability and effectiveness.

In addition, the Indonesian government is stepping up its measures to strengthen the restorative justice system in dealing with children in conflict with the law. This process should take into account the principle of the best interests of the child as well as the relevant Beijing Rules and Riyadh Guidelines.

Last year, the Head of the Supreme Court, the Attorney General, the Chief of the Indonesian Police, the Minister of Social Affairs, the Minister of Law and Human Rights, and the Minister of Women’s Empowerment and Protection of children, issued a Joint Decree on handling cases of children in conflict with the law using the restorative justice approach.

In conclusion, Indonesia would like to reiterate its strong committment to the elimination of violence against children both in Indonesia and around the world.

Mr. Chairman, Indonesia would like to reiterate its support on the inscription of an agenda item concerning ‘IPR Enforcement Trends’ at the Council for TRIPS. In my delegation’s view, this inscription is not only timely but also highly necessary given the latest developments in IPR enforcement trends in the global trade context. My delegation is… Continue reading 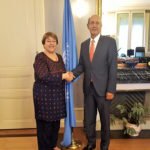 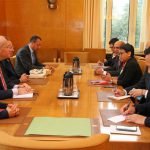 44th SESSION OF THE UNITED NATIONS HUMAN RIGHTS COUNCIL 6 JULY 2020 Madam President, As we have witnessed in the past couple of months, the COVID-19 pandemic affects all of us indiscriminately, yet the most impoverished in our community disproportionately. Not only the pandemic but also the current rate of climate change is expected to… Continue reading

Madame President, Indonesia extends its appreciation for the Secretary General’s report on the progress made in the implementation of the recommendations of the United Nations Fact-Finding Mission on the Gaza conflict by all the parties concerned, including UN bodies, in accordance with HRC resolution S-12. Equally, we also take note with appreciation of the Progress report… Continue reading