I would like to thank the High Commissioner for her report this morning and for providing updated information about continuing human rights violations in the Occupied Palestinian Territories. We concur with the recommendations therein.

My delegation aligns itself with the statements made by Pakistan and Egypt on behalf of the OIC and NAM respectively.

Indonesia remains deeply concerned about the human rights situation in the OPT, particularly in the Gaza Strip, where living conditions have deteriorated sharply since the excessive and disproportionate aggression of Operation Cast Lead.  No progress on peace has been realized after the Goldstone Report. The recommendations of the Goldstone Report, of which we supported, has not been fully implemented.

The Settlement expansion policy constitutes a blatant violation of both existing international law and many other UN Security Council and General Assembly Resolutions and only adds fuel to the fire of an already tense situation.

Furthermore, Indonesia also strongly condemns the seizure of the Ibrahim and Bilal Ibn Rabah Mosques in the respective occupied cities of Hebron and Bethlehem by the Occupied Power.

This deplorable act constitutes a blatant infringement of international law, particularly the Fourth Geneva Convention which prohibits the tampering with or modification of religious heritage sites in the areas that it occupies.  We demand Israel, as the Occupying Power, to halt this provocative and illegal policy.

It is evident that such activities do nothing but increase tensions and hostilities in the region and ultimately hinder efforts towards a long-awaited peace process.

My delegation welcomes the report of the High Commissioner on the implementation of Human Rights Council resolution S-9/1 and S-12/1, which we believe to be objective and comprehensive.

These human rights violations include a lack of access to clean water and adequate sanitation in the Gaza Strip and continuing demolitions and forced evictions of Palestinian residents in East Jerusalem.  These issues constitute a breach of the fundamental human rights to water, sanitation and decent housing.

Indonesia also remains concerned about continued violations of the right to freedom of religion. The Occupying Power prohibits men below 50 years and women below 45 years to exercise their right to worship in the Al Aqsa Mosque in East Jerusalem. This is a flagrant breach of Article 18 of the ICCPR.

All of the violations outlined above, alongside documented incidences of torture and arbitrary detention, are testament to the Occupying Power’s clear disregard for the basic right to life.

My delegation welcomes the establishment of an Independent Investigative Commission by the Palestinian Presidential Decree as a follow up on the report of the UN Fact Finding Mission. We urge the Commission to expedite its investigations into the alleged violations. We also demand that Israel increase efforts to conduct independent investigations into human rights violations in conformity with international standards.

In conclusion, allow me to reiterate Indonesia’s deep regret that this protracted conflict remains unresolved. We express our steadfast support of the diplomatic efforts by the international community in finding a just and comprehensive two-state solution leading to the establishment of an independent and democratic State of Palestine. 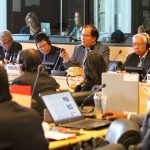 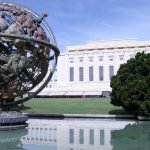 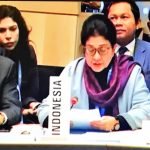 Chair, I deliver this statement on behalf of the member states of the Foreign Policy and Global Health (FPGH) initiative compromising Brazil, France, Indonesia, Norway, Senegal, South Africa and Thailand. We support WHO’s work in emergencies and stress the importance of its role as health cluster lead in humanitarian emergencies. We further express gratitude to… Continue reading