I feel compelled, if somewhat reluctant, to take the floor on behalf of Indonesia if only because, like others, we believe it would be remiss for us not to add our voice to the record. But first, allow me to commend you for the balanced, transparent and inclusive manner in which you conducted your presidency. Our delegation truly appreciates your able guidance, as well as the dedication and wisdom you have brought to forging consensus and finding solutions. May I also extend my sincere appreciation to the Brazilian delegation for their excellent work in assisting you and in consulting extensively with all delegations.

This gathering is also an opportunity for us to reiterate that Indonesia has always attached great importance to the Conference on Disarmament as the sole multilateral disarmament negotiating forum of the international community. We are therefore of the view that the impasse which continues to affect the CD is not acceptable, and that no effort must be spared in order to break it.

In this regard, we welcome any relevant meeting or proposal that would provide an avenue for us to strengthen efforts towards a consensus.

We support the relentless efforts made by you, Mr. President, in conducting bilateral consultations with all CD member states, and also congratulate you on having come up with the proposal contained in document CD/1889 of 6 July 2010. We believe that the proposal has been given serious consideration with a view to reconciling the various diverging positions, drawing on a number of past proposals, statements and inputs from intensive consultations.

My delegation considers the proposal to be a good starting point for moving forward. Although some of our concerns and those of other CD member states are not reflected in it, it can still be improved.

With reference to the notion of a balanced and comprehensive programme of work, we share the widely-held view that all items on the CD agenda are equally important to work on, and that negotiations on any single item cannot preclude possible outcomes from discussions on other items.

In this vein, I would like to emphasize Indonesia’s commitment and continued efforts to strive towards achieving total nuclear disarmament as its highest priority; in accordance with this goal, our request for security assurances from nuclear-weapon states remains prevalent.

Finally, with regard to the treaty on fissile material, we are of the view that the treaty should cover the issue of verification and go beyond merely prohibiting the production of new fissile material for weapons. The existing stocks of fissile material in some nuclear-weapon states are so large that a cut-off would have no practical effect on restricting the number of nuclear weapons that they could produce.

In conclusion, therefore, Mr. President, Indonesia remains flexible and can go along with any consensus that may emerge in the CD.  We are strongly committed to supporting your efforts to achieve that end.

INTERVENTION BY THE DELEGATION OF INDONESIA*) AT THE AGENDA ITEM 3 , THE 28TH SESSION OF THE HUMAN R...

Mr. President, My Delegation would like to thank the Special Rapporteur on the Right to Food, Ms. Hilal Elver, for her report and valuable presentation. The report elaborated a broad aspect of access to justice in the fulfillment of the right to food. Indonesia takes note with appreciation the recommendations of the Special Rapporteur to… Continue reading 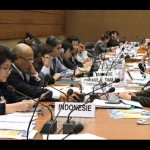 Mr. Chairman (President of Trade and Development Board, Ambassador Jean Feyder of Luxembourg), Secretary General of UNCTAD (Dr. Supachai Panitchpakdi), Excellencies, At the outset, let me take this opportunity to congratulate the Secretary General of UNCTAD for the convening of this Trade and Development Board’s 49th Executive Session on LDCs and MDGs. I am particularly… Continue reading