Indonesia welcomes the reports produced by the two independent experts on access to safe drinking water and sanitation, and on extreme poverty. In particular, we find it both timely and helpful that these two issues have been addressed jointly. Indeed, the fact that extreme poverty and difficult or denied access to water and sanitation are so obviously interlinked has been overlooked for too long, and its human rights dimension overshadowed.

Both reports highlight the right to water and sanitation as a basic human right and the need for countries to adopt a normative approach on the issue. Thus, ratification of the International Covenant on Economic, Social and Cultural Rights should be a priority of all governments as an important prerequisite to elaborating or upgrading legislation.

My delegation considers it important that any decision taken by the state, in any country, to delegate service provision must be taken in a democratic and participatory process. This should not only involve the state and the private sector, but also engage regional legislative bodies as well as civil societies and other relevant stakeholders across the board. My delegation also views that the various aforementioned actors must designate roles, responsibilities and other remedial measures aimed at establishing accountability mechanisms in the event that the right to clean water and sanitation is not respected. In doing so, a human rights perspective should be incorporated once the mechanisms are established.

We also appreciate the important conclusions of the two reports on the status of women and girls in certain parts of the world, and the particular problems they face with regard to access to water and sanitation. As the reports rightly point out, the restrictions that they suffer are direct and aggravating factors of extreme poverty which severely prejudice the attainment of the Millennium Development Goals, particularly Goal # 7 – Target 7C, in certain regions. Particular attention should therefore be given to respecting the rights of women and girls when elaborating or upgrading water-related legislation, which should be strictly non-discriminatory.

In conclusion, Mr. President, we would like to ask the independent experts what simple remedial steps, at the level of individual households, they would recommend in order to help governments in the most affected countries or regions relieve water-related problems? This would naturally be on the understanding that these measures would be temporary and ad-hoc, pending the implementation of the necessary and appropriate human-rights oriented legislation and regulations. 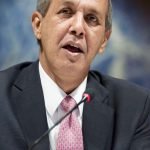 INTERVENTION BY THE DELEGATION OF INDONESIA AT AGENDA ITEM 3 AT THE 32nd SESSION OF THE HUMAN RIGHTS...

Mr. Vice President, My delegation would like to thank and take note of the report of the Special Rapporteur on the impact of bilateral and multilateral trade agreements on the human rights of migrants. Allow me to elaborate efforts taken by the Indonesian Government which is in line with your recommendations. As one of the… Continue reading 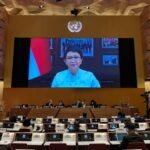