My delegation would like to thank the delegation of the Federated States of Micronesia (FSM), led by H.E. Mr. Jackson Soram, Deputy Assistant Secretary for Multilateral Affairs, for their well-documented and carefully prepared national report. For this exercise, the Federal government has enlisted the full participation of the State governments and consulted a wide array of governmental institutions, national agencies, NGOs, and groupings from civil society.

We would like to commend the efforts taken by FSM for its efforts in strengthening the democratic principles which are crucial in guaranteeing such fundamental rights as the right to freedom of expression, to peaceful assembly and association, to education, and to health, all of which are reflected in the constitution. Indonesia would therefore like to encourage the Federal government to continue its positive efforts to build up its democratic institutions.

We also note from the report that the FSM has ratified the CEDAW and has done much to promote and protect the basic rights of women. This right is stipulated under the constitution which guarentess freedom from discrimination based on sex.

As a multicultural and multi-ethnic nation, Indonesia empathizes with and respects the cultural values and traditions of the FSM. The fact that these are protected through the Judicial Guidance Clause of the constitution serves to remind the courts and governments of the need to render decisions which are consistent with Micronesian customs and traditions.

We would like to make two recommendations which we believe would contribute to facilitating this process: the first would be that the FSM establish a National Human Rights Institution in cooperation with and with the assistance of the international community; and the second that the government consider ratifying the ICCPR and ICESCR, which are key instruments for the promotion and protection of a number of other fundamental rights..

Mr. President, My delegation would like to thank the High Commissioner for her update. We align ourselves with the statement made by Pakistan on behalf of the OIC and Iran on behalf of the Non-Aligned Movement respectively.   Mr. President, Indonesia shares the High Commissioner’s concern on the alarming development in Syria and concurs her… Continue reading 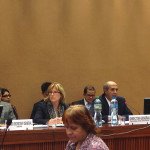 Mr. President, My delegation welcomes the delegation of Kiribati and would like to extend our appreciation for the presentation of their national report. Indonesia notes with appreciation the various efforts taken by the Government of Kiribati to promote and protect human rights of their citizens. The adoption of various human rights related legislations is commendable…. Continue reading 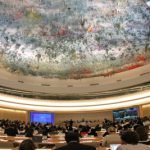 Madam President, My delegation would like to welcome the delegation of Poland headed by H.E. Ms. Grazyna Bernatowicz and thank them for their comprehensive national report and continued engagement in the UPR process. Indonesia commends the Government of Poland for the extensive and inclusive national reporting process, involving various national stakeholders, including the inter-ministerial coordination,… Continue reading

Mr. President, First of all, Indonesia associates itself with the Joint Statement of the Like-Minded Group of Countries (LMG). Indonesia shares the High Commissioner’s view that the promotion and protection of human rights should be achieved through ensuring non-selectivity, impartiality, equal focus on all human rights and constructive dialogue and avoiding practices of double standards,… Continue reading