Statement by the Delegation of Indonesia, Ambassador/Permanent Representative of Indonesia at the 18th Session of the Human Rights Council – SRSG on Children in Armed Conflict

At the outset, my delegation associates itself with the statement made by  Pakistan on behalf of the OIC.

My delegation would like to thank Ms Coomaraswamy for her report and presentation today. It is heartening to learn from the report of the progress accomplished in certain areas, notably on the signing of action plans to release children from armed groups. However, we share her concern as to the urgency of intensifying efforts to accelerate the release of children in some countries and to continue combating the impunity of violating parties.

My delegation is particularly alarmed by the growing trend of attacks on schools and hospitals. These attacks constitute the denial of the very basic rights of children, including their right to education and to health as fundamental elements of their empowerment and future.

Indonesia is currently in the final phase of its ratification of the Optional Protocol to the CRC on the Involvement of Children in Armed Conflict, as indicated in Indonesia’s National Action Plan on Human Rights for the period 2011 – 2014. In this process, a number of focus group discussions and inter-governmental agency meetings have been carried out, and the academic text finalized.

Article 63 of Law No. 39 of 1999 on Human Rights specifies that “Every child shall have the right not to be involved in events of war, armed conflict, social unrest, and other events involving violence.” Furthermore Article 87 of Law No. 23 of 2002 regarding Child Protection clearly criminalises those who contravene the law by recruiting and equipping children for military purposes or who misuse children by involving them in political activities, war, armed conflict or social disturbances, or in violent events.

In line with Article 1 of Law 23 of 2002 regarding Child Protection, Indonesia applies the set minimum age of 18 years for recruitment for military purposes. In this regard, my delegation would welcome a further update from Ms Coomaraswamy on her proactive global initiative of a “Zero Under-Eighteen Campaign”.

In conclusion, we are all aware that most cases of children in armed conflict take place in countries with limited resources. Therefore, as members of the international community, it is also our common obligation to lend assistance to the countries concerned in addressing the political, social and economic factors that facilitate the recruitment and use of children. By doing this, we can contribute to ensuring that the recommendations of the Special Rapporteur are properly implemented.

Mr. President, Indonesia would like to associate itself with the statements delivered by distinguished delegates of Iran and Pakistan on behalf of NAM and OIC respectively as well as LMG joint statement delivered by the delegation of Nicaragua. As already stated earlier, up till the present being, the Palestinian people continues to experience tremendous sufferings…. Continue reading Convention against Torture Initiative 2014-2024 PRESS RELEASE First CTI Forum confirms Governments’ commitment to end torture No State stands alone in the fight against torture. When the Convention against Torture Initiative today concluded its first annual Forum, the message from Government representatives from all parts of the world was clear: Through a new concerted approach… Continue reading

Statement by the Indonesian Delegation at the 14th Session of the Human Rights Council, Panel on Tra...

Madame Deputy High Commissioner, Mr Chairman, Let me first of all thank the panelists for having the courage to speak here at the Human Rights Council today. It is our responsibility to ensure that the issue of trafficking is seriously addressed and measures are taken to clamp down on all those who perpetuate it. The… Continue reading 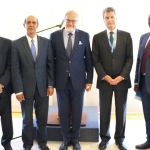 Thank you, Moderator. At the outset, my delegation would like to thank Co-Chairs and members of the bureau for providing us with guiding questions under this item.  Indeed, it is clear that the Working Group should prioritize the assessment of the benefits of developing a WHO instrument on pandemic preparedness and response. Chair, Yesterday many… Continue reading