Statement by H.E. Mr. Dian Triansyah Djani, Permanent Representative of Indonesia at the 13th Session of the Working Group on Universal Periodic Review – Consideration of the UPR Report of Finland

My delegation would like to thank the delegation of Finland for their comprehensive national report and continued engagement in the UPR process.

Indonesia welcomes the adoption of the first National Action Plan of the Government of Finland on Fundamental and Human Rights 2012-2013, which includes projects to promote the implementation and monitoring of the fundamental and human rights situation in Finland. We also note that numerous stakeholders, including NGOs and civil society were fully involved in its formulation.

Indonesia also commends the Government of Finland for the establishment of the Human Rights Center. The Center begins its work this year, aiming at promoting fundamental and human rights, including through information, education, training, and research programmes.

My delegation welcomes various measures and initiatives in eliminating discrimination and preventing violence against women and children. These include the Equality First project which seeks to support national authorities in their work to promote equality and non discrimination; an interdepartmental programme to reduce violence against women for the period from 2010 to 2015, and the National Action Plan against Disciplinary Violence for Children for the period from 2010 to 2015. Indonesia therefore recommends the Government of Finland to continue their efforts in this regard.

We note that the Finnish legislation does not differentiate migrant workers and immigrants. However, we recommend the Government of Finland to expedite means and ways towards the ratification on the International Convention for the Protection of the Rights of All Migrant Workers and Members of their Families as part of its international obligation in promoting and protecting the rights of migrant workers.

To conclude, Madam President, Indonesia would like to offer its best wishes to the Government and people of Finland in their future endeavours towards the promotion and protection of human rights at all levels.

Statement of the Delegation of the Republic of Indonesia to be delivered by Mr. Wisnu Widjaja, Deput...

First Session of the Preparatory Committee of the Third UN World Conference  on Disaster Risk Reduction Geneva, 14-15 July 2014 Madame Chairperson, Allow me, on behalf of my delegation, to congratulate you for assuming the role of the Chair for this important meeting. We strongly believe that, under your able leadership, we will have a… Continue reading 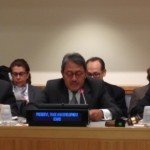 INTERVENTION BY THE DELEGATION OF INDONESIA PANEL DISCUSSION ON THE PROTECTION OF HUMAN RIGHTS OF PE...

AT THE 27TH SESSION OF THE HUMAN RIGHTS COUNCIL 10 SEPTEMBER 2014   Mr. President, My delegation thanks the panellists for their invaluable thoughts. In Indonesia, rights of persons deprived of their liberty, including detainees, to receive a human and respectable treatment are firmly guaranteed in the Constitution and relevant legislations and measures. For a… Continue reading

INTERVENTION BY THE DELEGATION OF INDONESIA PANEL DISCUSSION ON THE RIGHT TO PRIVACY IN THE DIGITAL ...

Mr. President, My delegation thanks the panellists for their invaluable presentations. Indonesia attaches great importance to this issue, in particular with the exponential growth and accumulation of power of certain states as well as companies due to information technology infrastructure which they possess. Indonesia underlines the need to observe the principles that the right to… Continue reading

Mr. President, On behalf of my delegation, I would like to thank you for initiating this week’s session of the Council review process and for providing Indonesia with an opportunity to take the floor today. My delegation would also like to align itself to the statements made by Pakistan and Egypt on behalf of the… Continue reading