The Charm of Coastal Batik and Indonesian Cultural Dances

As part of series of activities in commemorating the 67th Anniversary of the Independence Day of the Republic of Indonesia, a Diplomatic Reception was held by the Permanent Mission of the Republic of Indonesia in Geneva, Switzerland, on Tuesday night, 11 September 2012. The atmosphere of the diplomatic environment strongly sensed as it was held in the city which seats of numerous international organizations, including the United Nations Office of Geneve (UNOG), one of the most active centre of multilateral diplomacy in the world. The reception was held at the Intercontinental Hotel, Geneva. Ambassador Edi Yusup, the Charge d’Affaires ad interim of the Mission, and Ambassador Erwidodo. and their spouses hosted the event.

“The reception is not only intended to enhance the cooperation between Indonesia’s diplomats and our counterparts in diplomatic circles, but also to promote our rich cultural heritage, as well as to embrace our nationals in Geneva” said Ambassador Edi Yusup on his impression of the diplomatic reception when interviewed in between receiving felicitations remarks from his diplomatic colleagues present that evening.

More than 300 invited guests were present at the Reception, most of them are diplomatic officials of foreign permanent mission in Geneva, including of some key countries, representative of the Canton of Geneva’s local government, officials of the United Nations and of the World Trade Organization (WTO), as well as of other international organizations, and some key figures of Indonesian nationals in Switzerland. Director General of International Organization for Migration (IOM), William Lacy Swing, was also present.

This diplomatic reception was held at the end of this summer, therefore, the theme of “the Charm of Coastal Batik” was chosen as this type of batik has generally bright colors, typical of summer, and identical to openness, friendliness, elegance, dynamism and optimism.  In addition to various batik collections, the Mission also exhibited some batik-making tools, such as canting (the traditional tool that is used to apply wax in fine dots and lines on a cloth), samples of batik wax, and batik-pattern stamping tools. This cultural exhibition was aimed at introducing Indonesian batik, which has been listed by UNESCO as one of the intangible cultural heritage of humanity.

The invited guests warmly offered their felicitations on the occasion of Indonesia’s 67th Anniversay and expressed their appreciation and admiration of the cultural performance and exhibitions in the Diplomatic Reception. Director General of International Organization for Migration (IOM), William Lacy Swing, said “It is Fantastic. I particularly appreciate the Batik theme chosen.It gives a true sense of what Indonesia all about”. 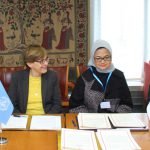 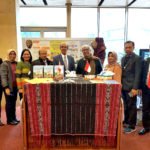 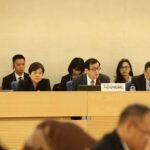