First of all, I would like to once again extend the Government of Indonesia’s sincere appreciation and gratitude for the support and encouragement as well as valuable inputs  that Indonesia received during the interactive dialog at the 13th Session of the Working Group on Universal Periodic Review on Indonesia in May 2012.

The UPR process has provided an important platform for countries to be exposed and scrutinized on their human rights policies and practices in the spirit of constructive dialogue and cooperation by  their fellow member states as mandated by GA resolution 60/251 and Council’s resolution 5/1.

We are content to the refined technicalities of this mechanism resulted from the Human Rights Council Review in 2011 which enabled us to have a more transparent, effective and efficient review. Many improvements were visible including the modalities of inscription to establish list of speakers. A 3.5-hours review, 30 minutes addition to previous duration for dialog, has also allowed us to have a more profound and meaningful discussion.

Indonesia is further of the view that constructive spirit and cooperation was evidently felt during  interactive dialogue with the Working Group last May. We hope that this positive atmosphere could be nurtured throughout this and subsequent UPR cycles.

We do give serious consideration to every comment and recommendation put forward by member states during the UPR Working Group’ session on Indonesia.

As you may recall, during the review, Indonesia received a total of 180 recommendations, which comprise broad spectrum of issues and aspects of human rights.

The UPR mechanism has drawn attention from public in Indonesia particularly prior to, during, and after the review of Indonesia last May. This is a sign of hope and expectation from Indonesian public of the potential contribution that the UPR process has for further advancement of our national efforts in the field of human rights. Therefore, aside from garnering inputs in making our national report for UPR, we also conducted a series dissemination of information after the review. This dissemination of information activities has three-pronged objectives:

First, to further reach out general public about UPR mechanism and its process and its significance to Indonesia;

Second, to develop common understanding among the government ministries and agencies, civil society and general public about UPR process;

Third, to build common ownership among the relevant stakeholders, particularly among government’s ministries and agencies concerning the implementation of UPR recommendations which are supported by the government of Indonesia.

For that reasons, immediately after the Session, the Government of Indonesia has translated the Report of the Working Group of the UPR on Indonesia to Bahasa Indonesia.

In addition, the Government also conducted a series of meeting and consultations on UPR with relevant Government ministries/agencies, civil society and parliament. The presence of some members of Indonesian parliament with us here today, as part of our delegation, is reflective of the existence of such sense of ownership from this important stakeholder. The Government also held meetings and consultations on UPR at the sub-national level including in the province of Aceh.

In determining its positions on the 36 pending recommendations, the Government had convened broad-based consultations with relevant stakeholders including garnering views from civil society.

From the consultations, we are pleased to inform the Council that we were able to accept 6 more recommendations, in addition to 144 recommendations that we accepted during our review last May.

These accepted recommendations cover the issues of ratification of international treaties namely the Optional Protocol to the Convention on the Elimination of all forms of Discrimination Against Women (OP-CEDAW) and ILO Convention No. 189 on Descent Work for Domestic Workers; the increase of human rights transparency; access and mandate of the ICRC in Indonesia; and  raising awareness on the harmful effects of female circumcision with a view to eliminate the practices of female genital mutilation.

30 recommendations do not enjoy our support due to following reasons:

First, some of the recommendations do not reflect the actual situation in Indonesia nor conform to factual challenges faced by Indonesia. For example, the one on the issue of corporal punishment which is not relevant since the practice is not tolerated in Indonesia both legally and culturally.

Second, some of the recommendations are subject to further national debates for their possible inclusion in the next human rights action plan. For instance, recommendation for Indonesia to ratify the Optional Protocol to the Convention on the Rights of the Child on Communication. Although this is a worthy recommendation, but it concerns a human rights instrument which was just recently adopted by the UN General Assembly in late 2011, hence it is yet to be incorporated into our next national human rights plan of action.

Third, some of the recommendations are lacking of relevance since the measures recommended were already fully implemented before the review such as the ratification of the Convention on the Rights of Persons with Disabilities that the Government of Indonesia has done in 2011.

I am pleased to share that some recommendations we received during the review were already implemented by Indonesia. For example, the ratification of two Optional Protocols to the Convention on Rights of the Child regarding the involvement of children in armed conflict and regarding the sale of Children, child prostitution and child pornography were done through the adoption of Laws No. 9 and 10 of 2012 by the Parliament on 23 July 2012.

Allow me also to share some relevant developments with regard to human rights promotion and protection in Indonesia since our review last May.

Indonesia has enacted Law No. 7 of 2012 on the Handling of Social Conflict which is aimed to strengthen the government’s legal framework in facilitating the resolution of conflicts in the society.

Furthermore, on 30th of July 2012, Indonesia enacted Law No. 11 of 2012 on Juvenile Criminal Justice System which provide better protection for children in conflict with the law.

It covers a number of principles, among others, on restorative justice and best interest of the child in line with the Convention on the Right of the Child. Most importantly, it rises the minimum age of a child’s criminal responsibility from 8 to 14 years old. We believe that this law will further strengthen our national framework in protecting and promoting children’s rights.

Aside from enactment a number of laws,  the preparation of at least three other legal frameworks are on the pipeline, namely:

First, the finalization of Decree of the Minister of Law and Human Rights on the introduction of programs on the promotion of human-rights friendly districts/municipalities;

Second, a Joint Decree between the Minister of Law and Human Rights and Minister of Home Affairs on establishing human rights parameters in the formulation of by-laws.

Third, finalization of a Bill of Truth and Reconciliation Commission. The bill is designed to strengthen our national legal framework in dealing with past human rights abuses.

Allow me at this stage to reiterate Indonesia’s commitment to implement recommendation that enjoy our support.

The government of Indonesia has decided to streamline them into the implementation of the current national human rights action plan. It means that their implementation will be carried out by relevant Government ministries and agencies, both national and sub-national levels, through their respective programs and budget. Through this framework, coordinated efforts amongst those government institutions are ensured.

As part of the action plan, their implementation will also be subjected to periodical monitoring, reporting and evaluation. In this regard, we will work in partnership with civil society and our National Human Rights Institutions.

Some recommendations that we support relate to the ongoing national efforts to address the current specific challenges in ensuring human rights protection in Indonesia.

Some challenges relate to addressing incidents which connote religious intolerance. In this context, we have to admit such incidents regrettably continued to take place in some communities. Nonetheless, we would like to inform you that there have been some progresses in the way of addressing those incidents. The latest incidents has drawn the attention of the highest authority, the President, and strengthened the determination of Government and general public to resolve the issue in comprehensive manner. Various public debates over the latest incident have enhanced further the public awareness and understanding on the importance of ensuring respect of religious freedom.

In a broader context, all in all, we remain committed to our endeavor to promote and protect the human rights of our people.

And for that reason, we are committed to striving for a coherent policies and actions of all the government ministries and institutions in this regard.

We are consistent in our efforts to mainstream human rights in our state’s policies.

We are committed to addressing resolutely any challenges and gaps in advancing the cause of human rights.

Indonesia’s democracy continues to consolidate and to mature. And, by working together with this Council, we seek to make substantial progress in the promotion and protection of human rights both to our people and people around the world.

Finally, before we embark on the consideration of the outcome of the UPR on Indonesia, allow me to reiterate our support to this important mechanism. 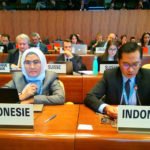 Statement of behalf of ASEAN at the 334th Session of the ILO Governing Body, Agenda Item INS 4 – U...

Member States of ASEAN align themselves with the statement made by Australia on behalf of the Asia and Pacific Group. ASEAN supports the implementation of the United Nations’ General Assembly Resolution on “Repositioning of the United Nations development system in the context of the quadrennial comprehensive review of operational activities for development of the UN… Continue reading

Statement by the Indonesian Delegation on Agenda Item 3 – ID with the Working Group on the iss...

Mr. President, My delegation thanks the Working Group and the Special Rapporteur for their reports. On the issue of the use of ICTs for the protection of human rights, we share the need for all actors to keep up with digital literacy and paying attention for new technology. In this regard, it is pertinent to… Continue reading