Permanent Representative of the Republic of Indonesia to the United Nations, WTO and other

Chairman of the Group of 77 and China in Geneva

As such, it also part of our collective preparations for some important events in the immediate future, including the 50th anniversary of the Group and the 50th anniversary of UNCTAD, both in 2014, as well as the preparations for the review of the Millennium Development Goals (MDGs) in 2015, and the articulation of a new global agenda for development that will represent the post-2015 development framework.

In that regard, let me extend my gratitude and appreciation to the resource persons, the Group Liaison, UNCTAD, UNITAR, South Center, as well as the participants that have made this important course possible.

For many of us this current situation evokes memories of the dawn of the global South, and the foundation that our forebears laid in Bandung Conference in 1955. The Conference eventually led to the establishment of the Non-Aligned Movement and later the Group of 77.  It was a time when the South was beginning to feel a sense of community, and it was a time when the South started to aware the power of its collective voice and subsequently of its collective action.

This collective process of looking towards the future underscored the important reality that no matter how the world may have changed, and no matter how individual member of the Group may have progressed and developed, what has continually characterized the global South is its unity, solidarity and commitment to the development of all.  What had not changed is the underlying solidarity of the global South and its commitment to the struggle for the weakest and most vulnerable among us.

It is the spirit of solidarity and strong commitment that will lead us to the achievement of our collective goals and aspirations for a more prosperous future.

We therefore need to strengthen the global South in our work here in Geneva.  Through this course, we seek to strengthen the important role of the Group of 77 and China in general and in particular, the Group of 77 and China in the Geneva Chapter. The first step is, among others, to institutionalize a mechanism for the transfer of skills, experience, and memory, from one generation to the next.  In other words, this course and the process it launches are intended to foster greater continuity in the Group.  We will also sought to provide participants with a solid background of the substantive issues they will address, as well as the benefit of learning from our veterans the lessons they have learned through their experiences.

This course does not represent of a singular event that we are going to have once a year, but rather a programme that is intended to stimulate and to inspire a new process of continuing education and skills refinement of our delegates. It is our hope and intention that this course will also generate follow-up mini-courses on specific issues and specific skills so as to keep our negotiators fully apprised of the latest developments in the field of development.

The ultimate result would be a capable, better trained, and better equipped team of negotiators to bring about a new and stronger of the global South. It is also our hope that there will be  a new generation of the South’s negotiators who share the skill and the spirit of the founding fathers of our global movement.

In this way, we would not only do our part for history, but more importantly we would be living up to our responsibility of making sure that we do all we can, seize every opportunity, and create impetus, to achieve our collective goals for a better, just and more prosperous world for our peoples. I wish all the very best for all participants.

Thank you very much for your attention. 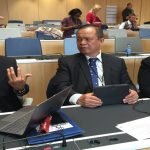 Mr. President, My delegation would like to thank the Special Rapporteur on the Right to Health for his first report under his newly obtained mandate starting August 2014. We take note that the report contains various conceptual frameworks that will guide the work of the Special Rapporteur throughout his mandate, based on valuable works and… Continue reading

Mr. President, Indonesia warmly welcomes the delegation of Egypt to the second UPR cycle. We appreciate the various efforts taken by Egypt to further promote and protect human rights, including eradication of illiteracy.  We recommend Egypt to make further efforts to eradicate illiteracy for all, including through, inter alia, sufficient budget allocation. We are also… Continue reading 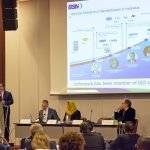 Statement by Minister of Trade of Indonesia. H.E. Mrs. Mari Pangestu, at the Working Session I of th...

Thank you Mr. Chairman, Throughout the past months we have taken note of calls for the review of the effective functioning of the WTO, which include the efficiency, transparency and possible improvements of its multilateral trading system. The rapidly changing global economic environment also requires the WTO to be responsive in exercising its role. It… Continue reading

Statement by Minister of Trade of Indonesia. H.E. Mrs. Mari Pangestu, at the Cairns Group Ministeria...

Thank you Minister Crean, First of all, let me express our sincere appreciation to the Government of Australia for convening this timely and important meeting. Our appreciation also goes to you, Minister Crean, for your able chairmanship that has been promoting our Group as one of the key players in the WTO. I fully support… Continue reading