My delegation welcomes the delegation of New Zealand, headed by Hon. Judith Collins, Minister of Justice and thanks them for the presentation of their second cycle UPR report.

Indonesia commends New Zealand for its staunch support and long-standing commitment in promoting and protecting human rights in the country. In particular, we highly appreciate the formulation and implementation of the New Zealand Disability Strategy which aims for an inclusive society where persons with disabilities can fully participate.

We also appreciate of the efforts to further consolidate human rights values and principles in the constitutional, legal as well as administrative frameworks of the country, including the process in advancing the consideration of constitutional issues, and preparation of the 2nd National Action Plan on Human Rights by its Human Rights Commission.

My delegation also believes that the promotion and protection of human rights in New Zealand can be further enhanced. In this regard, my delegation would like to put forward the following recommendations:

In conclusion Mr. President, my delegation wishes the People and Government of New Zealand all the best in their efforts to progress and to address the remaining human rights challenges in the country, including in ensuring human rights impacts on the post Canterbury Earthquakes.

Statement Delegation of the Republic of Indonesia Interactive Dialogue with the Special Rapporteur ...

Mr. President, Indonesia aligns itself with the statement delivered by the Philippines on behalf of ASEAN. At the outset we commend the Special Rapporteur, Mr. Saad Alfarargi, for his report and his contributions to the work of the Working Group on the Right to Development. Mr. President, Indonesia  views that the realization of the right… Continue reading

Mr. President, My delegation welcomes the delegation of Kyrgyzstan, led by H.E. Mr. AbdyrakhmanMamataliev, Vice Prime Minister of the Kyrgyzstan Republic, and thanks them for the presentation of their national report. The many advancements made by the government and people of Kyrgyzstan in the area of promotion and protection of human rights since the 2010… Continue reading 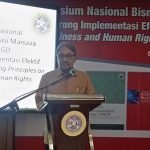 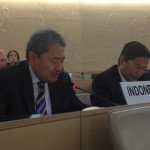 STATEMENT BY THE DELEGATION OF INDONESIA GENERAL DEBATE ITEM 5 *