My delegation thanks the Special Rapporteurs for their reports.

My delegation would like to align to the statement made by Pakistan on behalf of the OIC.

We share the importance of the right to freedom of expression in electoral contexts, as in the SR report.

We further share the need for voters, candidates/political parties, and media to be able to voice their opinion independently, equitably and freely.

We underline the need to adhere to principles of pluralism, transparency and accountability in ensuring the frameworks in which freedom of expression in the context of elections can be guaranteed.

In Indonesia with more than 500 local government and parliaments, more than 1000 elections occurred in one cycle.

We just concluded national legislative elections on 9 April 2014 and will conduct the presidential election on 9 July 2014.

Since 1998 reformation, all elections have been conducted in a free, transparent and fair manner. The freedom of expression of all actors has been the general rule.

We note, however, challenges remain.  In this regard, we note the recommendations put forward in the SR report.

We would like to pose the following questions: could SR elaborate more on how to prevent undue media dominance or concentration in practice? Taking into account that state is also obliged to facilitate good economic governance for all industry, including media industry.

Furthermore, what is the SR opinion to ensure the independency and equal access to media whose owners are also political aspirants? Is self-regulation for media sufficient in this regard?

Turning into the report of the SR on Freedom of Association and of Assembly.

We would like to re-iterate our commitment to non-discrimination principles as recognized by international human rights law.

In our interactive dialogues with the Human Rights Committee, Committee on ECOSOC rights as well as Committee on the rights of the child, we have repeatedly stated that all groups in the community are protected and the rights, including FOAA, are guaranteed.

Perpetrators that violate the rights of FOAA of specific group community have been brought to justice.

We acknowledge, however, that it is not only about judicial issue. It is also about human rights education to public. In this regard, the government continues to conduct public awareness-raising programs.

On the issue of place of worship, it should be reminded and differentiated with the right to worship which is guaranteed and non-derogable.

However, the issue of building of a worship place, as in other countries, also involves certain procedural matters such as environmental and public order impact assessment.

Furthermore, it needs more coordination since the matter of building permit is in the hand of local government. The government believes through dialogue and proper steps to implement laws and regulations, this issue can be resolved.

With regard to state ideology, it should be understood of context of Indonesia nationhood building.

The ideology has been affirmed and reaffirmed by all components in Indonesia. It is an open ideology with the freedom to discuss it including freedom of opinion towards it.

What needed to underline is that in terms of state to provide services and treatments, non-discrimination principle has and will continue to underpin them.

STATEMENT OF THE DELEGATION OF THE REPUBLIC OF INDONESIA 51st SESSION OF THE HUMAN RIGHTS COUNCIL IN...

Thank you. 1. My Delegation takes note the report of the special rapporteur and the recommendations contained therein. 2. Indonesia upholds the commitment to fulfill the right to development of all people. During the Covid-19 pandemic, this commitment was translated to placing people’s safety and needs at the centre of the response and recovery policies,… Continue reading

Thank you, Chair On system and tools, As previously mentioned in our intervention, we see that the main problem and gaps that need to be address both immediately and in the long term is on the issue of capacity and equity. Capacity to detect and equity to respond. In this regard, we support among others,… Continue reading

STATEMENT BY THE DELEGATION OF THE REPUBLIC OF INDONESIA AT THE PANEL ON THE IMPORTANCE OF ROBUST PU...

Thank you, Mr. President, We welcome the holding of this panel and thank the speakers for their presentations. The global recovery effort from the Covid-19 pandemic varies between countries and regions, evidently displayed by the disparity in vaccination rates and available fiscal space. Nevertheless, countries are pushing forward with their recovery efforts. Central to these… Continue reading 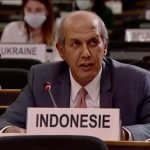 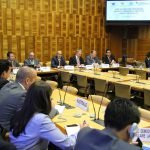