Speech by Hon. Fadli Zon as Global Organization of Parliamentarians Against Corruption (GOPAC) Chair at the 133rd Inter-Parliamentary Union Assembly

It is my great pleasure to address you today at this 133rd IPU General Assembly not only as a parliamentarian but also as the Chair of the Global Organization of Parliamentarians Against Corruption, (GOPAC). Our membership extends across the world to include current and former legislators from 106 countries, women and men who are dedicated to working together to combat corruption and promote good governance. I am here with Mr Osei Kyei Mensah Bonsu, the Vice-Chair of GOPAC, Member parliament from Ghana.

We believe that the crime of which Transparency International defines as the abuse of entrusted power for personal gain exists in most part of the issues of migration.

Another breeding ground for corruption in terms of migration is within the context of migration/refugees aid. There have been reports on how some groups/non-governmental organizations or even governmental institutions taking the advantage from the international contributions and donations by creating proposals where none of them are being implemented in correct manner.

Corruption deprives the fundamental rights of refugees. In a country where the rule of law is weak and state-apparatus integrity is low, migration issues often coupled with corruption. It occurs in every stages of migration from border protection, immigration control, up to the lack of services to the basic needs of the refugees.

Corruption is the facilitator of the migration related crime: human smuggling and trafficking. Smugglers and traffickers as well as corrupt officials use the migrants, those who are desperate enough—most of them are—for personal gain.

Smugglers treat migrants as goods, while migrants are compelled to pay some money as they are in a vulnerable situation that forcing them to do that. In the world of human smuggling, bribery pays: OECD said in their last paper.

Widespread corruption hampers development, leads to poverty, and closes economic opportunities as well as undermines the rule of law. These in the end stimulate people to move abroad, generating influx of human migration.

GOPAC believes that by combating corruption, we can provide a more prosperous and wealthy environment to our people, making them believe that their home provides all the best that they have always wanted. Further, we believe that attacking political corruption is the best way to diminish the drivers of forced migration.

This is because in most parts of the world, power tends to corrupt and by greed and corruption they have become one of the driver of international conflict; political corruption breeds popular resentment and inhibits action on international policy such as climate change.

At this valuable conference, let me share you on what GOPAC has done and will do to combat corruption, in particular corruption which may deprives the fundamental rights of our people—including those of refugees. At our 6th (sixth) Global Conference in Indonesia, held two weeks prior to the 133rd IPU Assembly we have committed to pursue the perpetrators of grand corruption—corruption that is so grave and whose effect on human life, human rights and human welfare are so catastrophic—by seeking the possibility to establish of such international measures such as: an optional protocol to the UNCAC on international court on corruption and UN Special Rapporteur on the negative impact of corruption on human rights.

GOPAC also takes into account the particular Goal No 16 of the Sustainable Development Goals (SDGs) where it pursue the dream of good governance and advocate for peace for the betterment of human life. In the future we will work towards these directions, guided by Yogyakarta Declaration adopted in Indonesia, a country with a strong and robust anti-corruption commitments.

As Indonesia has set the pathway for a corrupt-free nation through the development of an independent anti-corruption commission and court, robust criminalization of corruption and anti-money laundering laws, as well as other anti-corruption prevention legislative instruments, we wish that the same spirit also be embedded to all members of IPU.

GOPAC commits to have a fight against corruption to recover the enjoyment of rights of others. GOPAC officers have also made a strong link of their work into the issue of refugees and its root causes.

But these examples are not enough. We can and should do more and we cannot do this alone. Many more members are needed. Many more partnerships and collaborations are needed. GOPAC calls on each of delegate assembled, on the IPU, to recognise that the refugee crisis is an emanation of a broader corruption crisis, to recognise that we must work together to fight corruption.

Statement of the Government of Indonesia at the 334th Session of the ILO Governing Body, Agenda ite...

Mr. Chairman, Indonesia aligned itself with statement of the Asia-Pacific Group. We take note the proposed Plan of Action covers the period of the 2018-2023. Indonesia recognizes the importance of social dialogue, based on respect for freedom of association and effective recognition of the right to collective bargaining, in designing policies to promote social justice…. Continue reading

In responding to news release of the Human Rights Committee dated 2 April 2015 titled ‘UN Human Rights Committee deplores Indonesia’s responses to its call to stop executions for drug-related crimes’, the Permanent Mission of the Republic of Indonesia to the UN, WTO, and Other International Organizations in Geneva conveys the following: It is just… Continue reading

Thank you, chair. We appreciate the hard work of your team and the Secretariat in facilitating the requests made by member states at the first meeting of the Working Group, particularly on the development of the informative Dashboard of COVID-19 related recommendations, as well as the preliminary analysis from the COVID-19 related recommendation mapping. We… Continue reading

Opening Statement Mr. President, Dr. Supachai Panitchpakdi, Excellencies, Distinguished delegates, Let me begin by extending my warmest congratulation to you Mr. President, and members of your bureau, for your election. I am of the strongest conviction that under your able leadership and constructive approach we will strengthen our cooperation in building consensus and advancing development…. Continue reading

STATEMENT BY THE DELEGATION OF INDONESIA AT THE 22ND SESSION OF THE UNIVERSAL PERIODIC REPORT WORKIN...

Mr. President My delegation would like to thank the delegation of Maldives for their report and continued commitment to the UPR process. Indonesia notes with appreciation efforts to promote and fulfil right to education for all children in Maldives, as well as right to housing and health. We are also encouraged by the efforts to… Continue reading 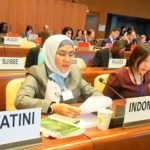 Statement of the Government of Indonesia at the 334th Session of the ILO Governing Body, Agenda Item...