My delegation thanks Lebanon for the presentation of their UPR report as well as their sustained engagement in the UPR process.

We also commends Lebanon’s efforts in continuously taking vigorous actions to implement the accepted recommendations from the previous UPR cycle, notwithstanding the political and security challenges in the country as well as in the region.

We are of the view that National Human Rights Plan 2014-2019 is very crucial in providing a clear guidance for the Government of Lebanon in formulating a comprehensive and targeted policy with a view to enhance its capability in promoting and protecting human rights in the country. In this regard, we recommend the Government of Lebanon to continue its ongoing efforts in adopting various national human rights policies based on the said National Human Rights Plan, including by providing necessary budgetary requirements for the actual implementation of those policies.

We also take note that the Government has already initiated an internal discussion with a view to establish an independent national human rights institution. In this regard, we recommend the Government of Lebanon to redouble its efforts in finalizing the establishment of the independent national human rights institution in accordance with Paris Principles.

To conclude, my delegation would like to offer its best wishes to the Government and People of Lebanon, in their future endeavors towards the promotion and protection of human rights in the country.

* The statement was delivered by Mr. Caka A. Awal.

Mr President, I would like to thank the delegation of Turkey, headed by H.E. Mr. Cemil Cicek, Vice Prime Minister of Turkey, for submitting their national UPR report and for providing an informative update about the human rights situation in the country.            The report highlighted the significant efforts undertaken by the Government in promoting and… Continue reading

Mr. President, My delegation would like to welcome the Delegation of Saint Kitts and Nevis and thank them for their remarks elaborating their efforts in promoting and protecting human rights in their country. In particular, we appreciate their continued engagement in the UPR process despite many challenges that they have faced, in particular financial challenges… Continue reading 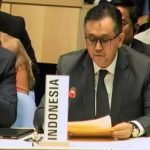 Joint FPGH Intervention Delivered by The Deputy Permanent Representative of The Republic of Indones...

Chair, I have the honor to speak on behalf of the member countries of the Foreign Policy and Global Health initiative comprising Brazil, France, Indonesia, Norway, Senegal, South Africa and Thailand. Since its beginning in 2006, this unique group of diverse countries has been advancing global health issues within the framework of Foreign Policy decision… Continue reading