Mr. President,
My delegation thanks the delegation of Papua New Guinea for their report and continued engagement with UPR process.
We take note of some developments, in policy and practice, on the promotion and protection of human rights in the country. These include inter alia:

We also note that in 2015, the Government endorsed the National Action Plan against Sorcery and Witchcraft-related Violence (SNAP). If possible, we would like to hear more details of this Plan.
Mr. President,
In the spirit of partnership and cooperation, we would like to recommend Papua New Guinea the following:

As a neighboring country, Indonesia stands ready to continue its constructive cooperation and engagement as well as share its experiences and capacity building programmes with PNG.
Indonesia wishes Papua New Guinea all the best in its future endeavors towards the promotion and protection of human rights in the country.
Thank you.

Statement by Minister of Trade of Indonesia. H.E. Mrs. Mari Pangestu, at the G-20 Ministerial Meetin...

Thank you Minister Amorim, Let me begin my intervention by expressing sincere appreciation to the Government of Brazil for convening this Meeting at this very important juncture. My appreciation also goes to you, Minister Amorim, for your able chairmanship that has been keeping the G-20 at the forefront in promoting development mandate of the Doha… Continue reading Mr. President, Allow me, like others,  to also congratulate the newly elected President of the Human Rights Council, the distinguished Ambassador of Thailand, H.E. Mr. Sihasak Phuangketkeow, a commendable diplomat and a fellow Asian with distinctive and honorable career, as well as the Ambassadors of Angola, Cuba, Norway and Slovakia as Vice-Presidents respectively. We wish… Continue reading 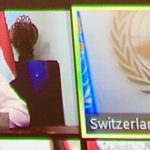 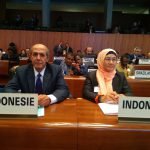