Mr. President,
Indonesia appreciates the Government of Syria for continuing its engagement with the UN human rights mechanism through its active participation in this UPR working group. We sincerely hope that the Government of Syria remains in its commitment to engage with other UN human rights mechanism and bodies to improve the human rights situations on the ground.
Before we proceed further, my delegation wishes to express our deep concern on the prolonged conflicts in Syria. We call on all parties involved in the conflict immediately to put an end on all human rights and humanitarian law violations in the country.
Mr. President,
Considering the complex circumstances in Syria, Indonesia would like to make the following recommendations to the Government of the Syrian Arab Republic:
To strengthen the works of all existing national human rights institutions in Syria;

INTERVENTION BY THE DELEGATION OF INDONESIA*) AT THE AGENDA ITEM 3 , THE 28TH SESSION OF THE HUMAN R...

Mr. President, My Delegation would like to thank the Special Rapporteur on the Right to Food, Ms. Hilal Elver, for her report and valuable presentation. The report elaborated a broad aspect of access to justice in the fulfillment of the right to food. Indonesia takes note with appreciation the recommendations of the Special Rapporteur to… Continue reading 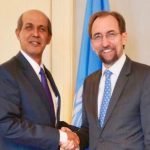 STATEMENT BY MS. DIRA FABRIAN, DELEGATION OF THE REPUBLIC OF INDONESIA AT THE INTERACTIVE DIALOGUE W...

44th SESSION OF THE UN HUMAN RIGHTS COUNCIL 6 JULY 2020 Madame President, We thank the Working Group for their report and commend their work which shows that more actions are needed to remove all discrimination against women amidst the changing world of work. Particularly women migrant workers. This includes the introduction of legal safeguards… Continue reading