Share this article
1. The Government of the Republic of Indonesia deeply regrets the Special Rapporteur’s decision to publish a news release regarding Mr. Victor Yeimo, who is currently undergoing legal proceedings following charges of his involvement in a coordinated national scheme of provocation in order to create a wave of violent protests and riots across Indonesia, mainly in Manokwari, Sorong, Fakfak, Timika, Deiyai, Jayapura, and Wamena in 2019. As has been repeated in numerous interactions between States and Special Procedures Mandate Holders (SPMH), the Special Rapporteur on Human Rights Defenders decision to issue a news release on this matter will continue to erode States’ trust towards the SPMH. The SPMH must bear responsibility to any disturbances and incitement of violences carried out by the separatist elements following the issuance of such release.

3. The response of the Government of Indonesia has also disproved the mischaracterization of Mr. Yeimo’s imprisonment which has been erronously -and biasedly- conveyed by the Special Rapporteur, as a result of his “peaceful involvement in anti-racism and self-determination protests in 2019”, despite numerous witness testimonies and video recordings attesting to the contrary.

4. Indonesia’s Constitution guarantees the protection of human rights and equality before the law for all Indonesians, regardless of their background. This protection extends to everyone, including to human rights defenders. In this connection, the mere self-identification by someone as being a human rights defender, does not and should never,render such a person immune from prosecution, when he or she is accused to be in violation of the law.

5. The news release by the Special Rapporteur was published even with fact the Government of Indonesia has provided a comprehensive response to the Special Rapporteur’s Joint Communication of 30 June 2021, which addresses the same issues contained in the news release.  Notwithstanding the challenges in coordinating the response due to the COVID-19 pandemic, this response was compiled through an extensive multi-stakeholder consultation and wassubmitted in a timely manner, within the 60 day time limit.

6. This reflects the Government of Indonesia’s commitment and seriousness in engaging in constructive cooperation with the Special Procedures Mandate Holders.

7. Attached to the Government of Indonesia’s response to the aforementioned SPMH Joint Communication, was an Annex containing supporting evidence addressing most, if not all, of the main allegations brought against Indonesia. The supporting evidence, including documents and photo evidence, which disproved, among others, the allegation that Mr. Victor Yeimo has been denied medical care and that “the Indonesian authorities have restricted his access to medical care”. The response includes details of routine medical examinations since his arrest on 9 May 2021.

8. The Special Rapporteur’s decision to use a “megaphone approach” even though already being granted the opportunity for dialogue and genuine cooperation by the relevant State, damages existing cooperation. All of this, seemingly just for the sake of personal gains through media exposure. 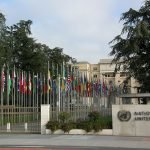 Opening Statement Mr. President, Dr. Supachai Panitchpakdi, Excellencies, Distinguished delegates, Let me begin by extending my warmest congratulation to you Mr. President, and members of your bureau, for your election. I am of the strongest conviction that under your able leadership and constructive approach we will strengthen our cooperation in building consensus and advancing development…. Continue reading