STATEMENT OF THE DELEGATION OF THE REPUBLIC OF INDONESIA INTERACTIVE DIALOGUE WITH THE WORKING GROUP ON ENFORCED DISAPPEARANCE 51ST HUMAN RIGHTS COUNCIL, 20 SEPTEMBER 2022

3. According to our national legal system, there are two mechanisms to solve allegation of past human rights abuse: 1) through judicial process; and 2) through a non-judicial settlement mechanism.

4. Judicially, a number of cases are still under investigation and some others are still waiting to be tried at human rights court.

5. Last August, our President has issued a decree which establishes a task force mandated to conduct non-judicial settlement on all past human rights abuses. This task force will significantly reinforce the efforts in solving past human rights cases through the judicial process.

6. Furthermore, the Government of Indonesia is in the process of ratifying the Convention for the Protection of All Persons from Enforced Disappearance (CPED).

7. Indonesia’s last remaining international human rights instrument to be ratified has been brought to the parliament, and the parliamentary debate is expected to commence soon.

8. Altogether, as mandated by our constitution and laws, Indonesia continues to strengthen the safeguards in protecting the human rights of its people. 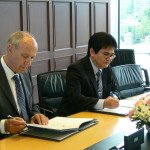 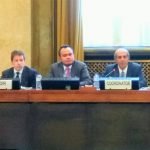 Mr. President, My delegation would like to welcome the Delegation of Saint Kitts and Nevis and thank them for their remarks elaborating their efforts in promoting and protecting human rights in their country. In particular, we appreciate their continued engagement in the UPR process despite many challenges that they have faced, in particular financial challenges… Continue reading

Menkes RI terpilih sebagai Ketua Board of the Global Fund to Fight AIDS, Tuberculosis and Malaria